Showing posts from September, 2017
Show all

The last week of September's events!

It's the last week of September. Temps will be dropping. Darker beers will be more "in season" - whatever, it's always stout season! *winky face*

Anyway, here is a list of everything happening THIS WEEK! 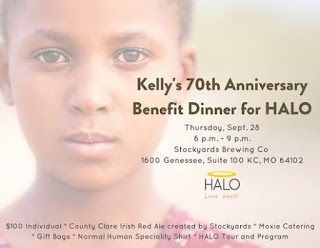 On September 28th 6-9pm, Stockyards' and Kelly's are continuing their support of The HALO Foundation with Stockyards' first beer dinner!

Head brewer Micah Weichert and Executive Chef Wes Gartner of Voltaire will team up to pair the evening's dishes with (of course) Stockyards' beers, including County Clare Irish Red Ale.

To be in on this fantastic event, please purchase your tickets here!

This week, there's another beer fest!

Ha! There really is another beer fest this Saturday in KS hosted by Brew Lab! I am kind of jumping the gun, I'll get to all those details in a second.

This past weekend was Brewtopia/Festival of the Lost Township and we hope everyone had a great time! We were out of town visiting friends, Piney River & Springfield Brewing Co. Fun time, great beers.

Here is your look ahead at this week's happening's...

There's a beer fest this weekend!!!

In case you haven't heard (from shares on our FB page) there is a beer fest this weekend, Saturday September 16th: Brewtopia/Festival of the Lost Township.

There are going to be several local breweries pouring as well as local homebrewers.  This is definitely a fest you do not want to miss out on!

For more information and to purchase tickets, please go here.

Now, for a look ahead to all other events happening this week:

Tuesday, September 12th:
* Prepare for Saturday's beer fest with a celebration week at Crane Brewing! (Come into The Taproom any day Tuesday-Friday and receive discounted pours with proof of ticket purchase.)